Assigned for internal re-purposing. The underground sewage system was probably installed in or around 1941 when the Camp was built. It is therefore very likely that the Army followed that line from 1947 onwards when the Camp was reassigned as a training camp. There is a match for this hut – Hut 68 – on the Eastern edge of the Camp. One or both of these huts was originally fitted out with a trough through which a stream of water ran continuously.

The story, oft repeated, is that a favourite trick was to create a tiny boat out of newspaper, set it alight, and launch it from the top of the stream, to the great dismay of the seated row of army cadets.

In 2020 Hut 48 was gutted internally for re-purposing. However, there is a plan to keep Hut 68 intact and to recreate the “trough” where there are indications of the original design.

A gents toilet from the Army Training Camp era 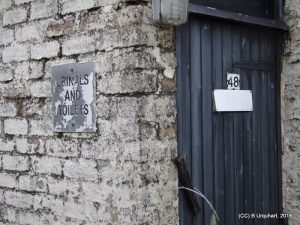